Will you be near Washington DC on Friday April 12th? Ben’s Friends is having a Meet 'n Greet.

The Ben’s Friends team will be in the National Harbor area (Oxon Hills) on April 12th. Would you like to join us at The Flaming Grill* at 5:30 pm? From there we’ll go to the Red Roof Inn across the road to socialize until about 9 pm. Bring what you would like to drink, and we’ll supply great company!

Please let us know if you will be able to attend: modsupseenie at gmail.com. Hope to see you there!

So why is your Team in Oxon Hills?

Orphan drugs An orphan drug is a medication developed to treat medical conditions which, because they are so rare, would not be profitable to produce without government assistance. The conditions are referred to as Orphan Diseases. At Bens Friends we call them “Rare Disease” and Our mission is to support those afflicted by these diseases. An “orphan disease” is any disease which affects a small percentage of the population. Most rare diseases are genetic, and thus are present throughout a person’s life even if symptoms do not immediately appear. Many rare diseases appear early in life, and about 30% of children with rare diseases die before reaching their fifth birthday.There is no universally accepted number for defining rare disease. A disease may be rare in one part of the world or in a particular group of people but common in another. As many as one-in-ten Americans suffers from rare disease.

Before the Orphan Disease act was passed byt the US Congress and versions of it passed world Wide in 1983, only 38 drugs were approved to specifically to treat orphan diseases. Today,there are 281 marketed orphan drugs and more than 400 orphan-designated drugs in clinical trials. More than 60% of orphan drugs are biologics. The U.S. dominated development of orphan drugs, with more than 300 in clinical trials, followed by Europe.

This came about primarily because of PATIENT ADVOCACY. Leading the charge was the National Organization for Rare Disorders, Global Genes Project, Children’s Rare Disease Network, Abetalipoproteinemia Collaboration Foundation, and Zellweger Baby Support Network. But despite the progress only 5% of Orphan Diseases have treatment available

This conference which includes researchers, government representative world wide, manufactures and advocacy groups such as Ben’s Friends allows networking of these various groups but also insures our voice will be heard.

Your team has been preparing Hard. Attending will Be Ben, Your Mod Support Team, and Several Community Moderators all with the goal in mind of new partnerships and making our voice heard.

We’ll have a full report when we return and MAYBE even a few pictures of the Meet and Greet!

Been Away For a While? Lost? Don’t know your password, or want a new one? Log-In isn’t working for you?

Here’s how to get right back into your Ben’s Friends community, lickety-split:

Click on this link to see a list of our communities, and then click on the colour banner for yours. Or just go straight to your home page if you remember it.

Your email @ddress is your [Username]. Use the email address on the “To” line of this message when it arrived in your email inbox.

The system will send you instructions for getting back into the community. If you don’t see anything in your Inbox, check your Spam folder: sometimes these emails land there by mistake. Open the email and follow the instructions, and you’ll be back in your Ben’s Friends “home”.

As always, ask your community moderator or Moderator Support if there’s anything that we can do to help. (Click on the ModSquad avatar wherever you see it, and then on “Message”). That’s what we’re here for. 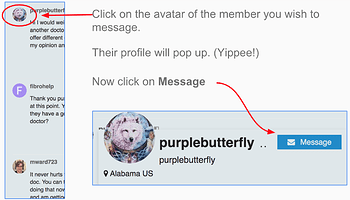 As always, all the best to you from all of us here at Ben’s Friends!