Spotlight on our Member: SewMomma from Living With Eagle Syndrome Community

Eagle Syndrome (ES) is a rare condition caused by the elongation of either or both temporal styloid processes, the pointed part of the temporal bones located below the ears. Symptoms include jaw pain and clicking, difficulty swallowing, headache, and neck pain among others.

Since Eagle Syndrome is not common, few doctors are familiar with it. People suffering from it often become frustrated by being passed on from one physician to another–everyone having no clue what causes the symptoms. Some even experience misdiagnosis, having to undergo surgeries that were unnecessary, only to be referred to yet another doctor afterwards.

And this is just the diagnosis or treatment aspect.

Eagle Syndrome patients can also suffer from not being taken seriously. People tend to doubt what they are complaining about, especially when they have already seen a lot of doctors who “didn’t find anything wrong with them.”

So with all the pain, symptoms, and uncertainty that they battle against, it is not unlikely for them to feel depressed at some point.

To say that having a rare disease like ES is a difficult ordeal is definitely an understatement. But to find a community that is there to support you during the entire process is a big thing–like how our Living With Eagle Syndrome member looks at it.

Michelle–or known as SewMomma in the community because of her love for sewing–is a mother of four children. She and her husband homeschool their kids. Their family loves spending time together playing games and watching sports or baking shows.

Michelle and her husband, Jeff, were no strangers to medical conditions before her diagnosis of Eagle syndrome. In 2012, they walked through open heart surgery with their 9-month old daughter, Ellie. Both Michelle and Ellie have made full recoveries. 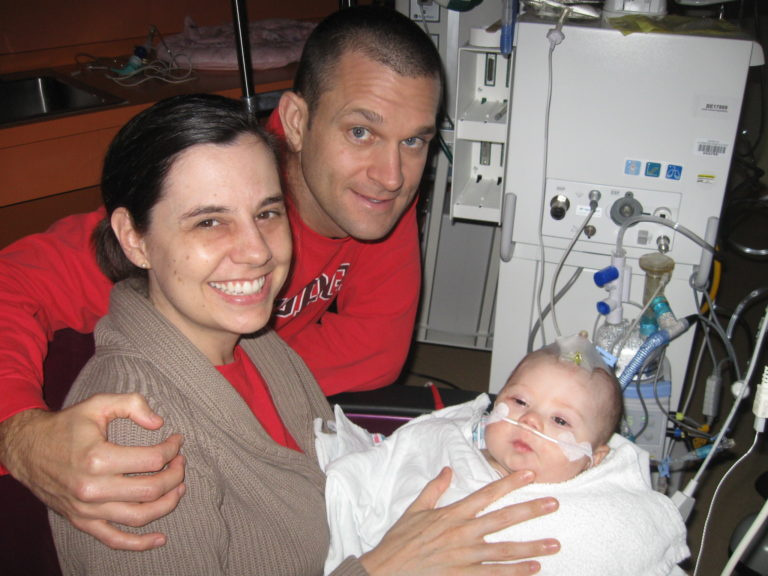 Let’s take a close look at her inspiring story.

Spotlight: Tell us your disease and diagnosis story.

In January of 2018, I noticed I was having trouble swallowing. I thought maybe I just needed to slow down when I ate. By the summer of 2018, I felt like I was going to choke whenever I ate.

Shortly after that, a very scary “clicking” sensation happened when I swallowed. It was as if my swallows were a two-step process and there was a hesitation when the food started to go down.

I had to really concentrate when I ate. It became easier to just drink protein shakes. I did that for at least one meal a day. It was then that I started to seek medical attention.

I started with a gastroenterology doctor and from there saw 10 different physicians: primary doctors, ENTs, general internal medicine, chiropractors, acupuncturists….

They all said I fit the profile of a busy, stressed mom and I need to ignore what was happening when I swallowed. By now I had lost 20 pounds in only two months and anxiety started to set in which made eating even less appealing.

I was struggling with concentration when homeschooling my kids. This was the year of high school Geometry for my oldest. I went back to my primary doctor and we decided two things–I needed to go on a low dose of an antidepressant to be able to continue to take care of my children and we would try muscle relaxers and a therapeutic dose of Ibuprofen.

The mental health got way better after 6 weeks but the throat problems were the same, if not worse. I read something about a steroid shot in the neck to help with difficulty swallowing. I contacted an oral surgeon who was willing to do it.

As I walked out of my house for that appointment, I told my husband, “I don’t know what I’ll do if this doesn’t help.” I truly felt like I had hit so many walls–it had now been 9 months with no answers.

By the grace of God, the surgeon noticed something on an x-ray that my dentist had sent over. He immediately wanted to do a panorex to see lower in my neck and said, “Whoa, those white lines down the sides of your throat aren’t supposed to be there!”

I finally had my answer–a ligament on each side of my throat had calcified. That was what was messing up my swallow! I came home and Googled “calcified ligament in throat” and “Livingwitheagle” at Ben’s Friends came up at the top of my search.

Spotlight: What’s the story about your joining this community?

Right away I started reading the posts of Eagle Syndrome members. Ironically, I had seen the Eagle syndrome support website once or twice as I searched “clicking in throat,” “trouble swallowing,” etc.

But during my earlier searches, I had dismissed the Eagle Syndrome website thinking: Well, no one has mentioned this condition so I must not have it. I didn’t yet realize it was a RARE condition and that’s why no one had been able to go really deep with me yet and discover this diagnosis.

Once I told my primary doctor about the calcification (she was extremely supportive and felt bad she had missed it), she wrote an order for a CT scan to get more accurate images and she started researching the condition for me.

No local surgeon had ever treated this condition so I started searching for doctors in Atlanta. I typed in “Georgia” in the Living with Eagle support website and a name came up at Emory! The member said wonderful things about the surgeon and I couldn’t wait to get an appointment.

There was quite a wait for this particular physician so I saw another one at Emory that treated the condition.

Unfortunately, this appointment did not go well. Even with the CT scan, all my symptoms, research, and my obvious decline in quality of life, he said to ignore it, live with it and said the surgery was too risky! I felt totally deflated, scared and I left in tears!

Spotlight: How has being a member changed you?

I came home from that appointment and felt hopeless! I started a profile on the website and posted what had happened to me.

Everyone was so supportive!!! I felt like I had enough strength to pick myself up and schedule a second opinion with that surgeon that was initially mentioned on the support group.

I was getting very positive messages like “it won’t be long now” and “your appointment is almost here.” Other members shared they had been seen by multiple doctors too!

I felt so much peace knowing there were people out there that understood what I was going through!

I started to share my story in more detail on the support group. People would share that they had the same symptoms as I was experiencing! I didn’t feel crazy any more!

I knew I couldn’t “ignore” what was happening to me. It was a terribly difficult thing I lived with every single day and people on the Ben’s Friends website showed me great empathy!

My second opinion appointment came and it was life-changing. The surgeon was a saint and he said, “Absolutely, you need to have these ligaments removed.”

Surgery was scheduled for the beginning of January, one year after I started having my very first symptoms. I hugged the doctor. I told him I had read on this website about how wonderful he was and he was happy to hear that.

Spotlight: Any experience as a member that you want to highlight?

Surgery was a two-part process–one surgery for each side of the neck. For the first procedure, I had a mild complication that made recovery a mental uphill battle. A nerve was a tiny bit “sleepy” as I like to call it, and my tongue took a few weeks to “wake up”.

I posted updates and questions about 3 times a day in those first few weeks. The moderators and fellow members were encouraging, informative and lifted me up when I started to worry too much. They were all right when they said it will get better! It did!

I braced for the second surgery in May and by then had a couple members on speed dial on my cell phone! Again I had some weird things happen after surgery (all normal) but my new friends were there to tell me it would all resolve.

With time, I healed and am now coming up on one year since the first surgery. The support of the Living with Eagle website has been with me all the way!!!

Spotlight: What could life have been like without this community?

I don’t really want to think about how I would have gotten through this without the support group.

My husband was well aware of how much it meant to me and he had to listen to me update him about a few other patients who had surgery around the time I did.

We’d talk about the members like they were our friends. He’d ask me, “How’s New Mexico doing?” or “Have you heard from California lately?”

These new friends were my rock!

Spotlight: Anything else you want to tell us?

I try to bring humor to the group when I post things now as a member who has made it to the other side of surgery.

I wish I could say I used humor more in my own life–easier said than done. But I do find that by encouraging others, it is becoming easier to take my own advice.

I will continue to try to lift up others by sharing my own experience. It’s amazing how effective it can be just to know you are not alone when you’re in a dark time.